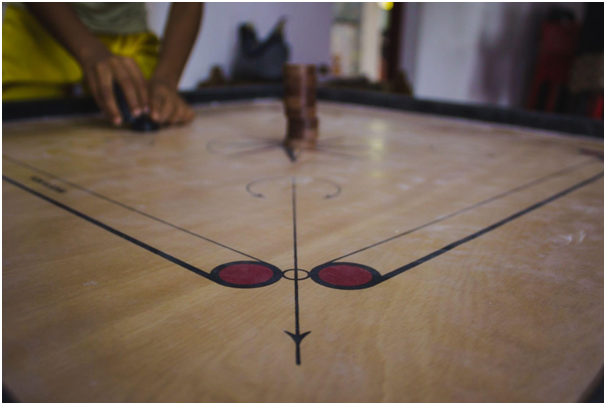 Outdoor games, like cricket and football, are undoubtedly the most sought-after games among both kids and adults. But when it comes to indoor games, carrom remains people’s favorite irrespective of the age group they belong to. The game originated in South Asia, which makes it more popular in Asian countries. However, the craze is in no way less in the rest of the parts of the world. There is a plywood board with 19 discs or carrom men – nine white, nine black, one red (the Queen), and a striker.

Though most players are encouraged to play online, be it indoor or outdoor sports, countries like the United States encouraged people to go for offline gaming in 2020 during the COVID-19 pandemic by organizing the “Play at Home” Online Carrom tournament, as reported by News India Times.

The game of carrom can be played between two players or four players. Whether you are playing online or offline, the rules remain the same. The game is divided into two teams, either one or two players each. One team has to target the white disc while another one has to be chased the black ones. The Queen is captured with a cover whereby players need to pocket their respective-colored disc as a cover as soon as they pocket the Queen. Not to forget, these discs are chased and hit using a striker.

The only difference that players will witness is how the discs are targeted and hit in the online mode. You do have to use your fingers, but only to set the angle. The more forcefully you tap the screen, the stronger your hit is. In the offline version, however, you have to use your fingers and decide the force according to how fierce the shot should be. Then, you can manually set the angle and proceed.

Though there is a craze of playing carrom online among kids and teens, there is a set of people of all ages who still prefer the traditional form of the game. If you belong to the latter group of individuals, you must understand the details of different striking styles in a carrom board game.

You have five fingers, and all of them are used to get set go in the carrom game. But how to use them properly is a big question. To answer this, let’s take a look at the different striking styles in carrom board game you can try based on the disc you are targeting.

The most common yet most compelling is this striking style. If you have observed people playing carrom, it is quite likely that you have found most of the players using the thumb with middle finger style. The middle finger is placed behind the striker along with the thumb. The force is wholly exerted on the middle finger as it forms the angle with the disc being targeted. The players hit the targeted carrom man with the exerted pressure to pocket or pot.

If you are not sure of your middle finger, you can accompany your thumb with an index finger to take a shot. In this case, the pressure will ultimately be on the index finger. The force exerted will determine the force with which you hit the disc. If you want a shot to be hit slow, make sure you don’t push the striker too hard or lose the chance. Like the thumb and middle finger style, players also use this one to take a straight shot for carrom men right in front of them.

If you have a hand that can stay still on the board while taking a shot, this style is for you. With your middle finger below the index finger shaped as a scissor helps you take an arc shot. For example, if you want a twisted hit to pocket the carrom men on a diagonally positioned pot, this shot can help. In this style, the index finger pushes the middle finger backward and then releases it to hit the targeted disc with full force.

It is a different form of placing your hand. The palm, normally seen on the board itself for all other striking styles, remains vertically above your index finger, middle finger, and ring finger. This is the shot opted for when you don’t have enough space to place your hands on the board because of the carrom men scattered all around. In this shot, the palm stands on the other three fingers, and hence, the place required to take a shot is less.

The shot, in this case, is taken using the middle finger only. The finger is placed at the edge of the striker without any kind of support from any other finger. This style is used to take the straight shot. The pressure is exerted on the middle finger because of the thumb’s thrust against the carrom board, making the finger take a forceful shot.

This striking style is similar to that of a middle finger style. Here, the index finger is placed at the edge of the striker. You can take a clear straight shot using the index finger, which gets the pressure from the thumb placed against the carrom board.

While there are numerous striking styles of targeting the carrom men placed right in front of you, attempting to pocket the ones placed on either side or backward needs fundamental skills. The thumbshot helps you take such shots. The thumb is positioned similar to how it is used when accompanied by the index and middle fingers. But the shot here is directed towards the carrom men placed backward or sideways. Now when you know the details of every striking style in the carrom board game, it will be easier for you to try them whenever you find them suitable for taking different shots. So, get the hang of all the shots and enjoy your offline carrom board game.